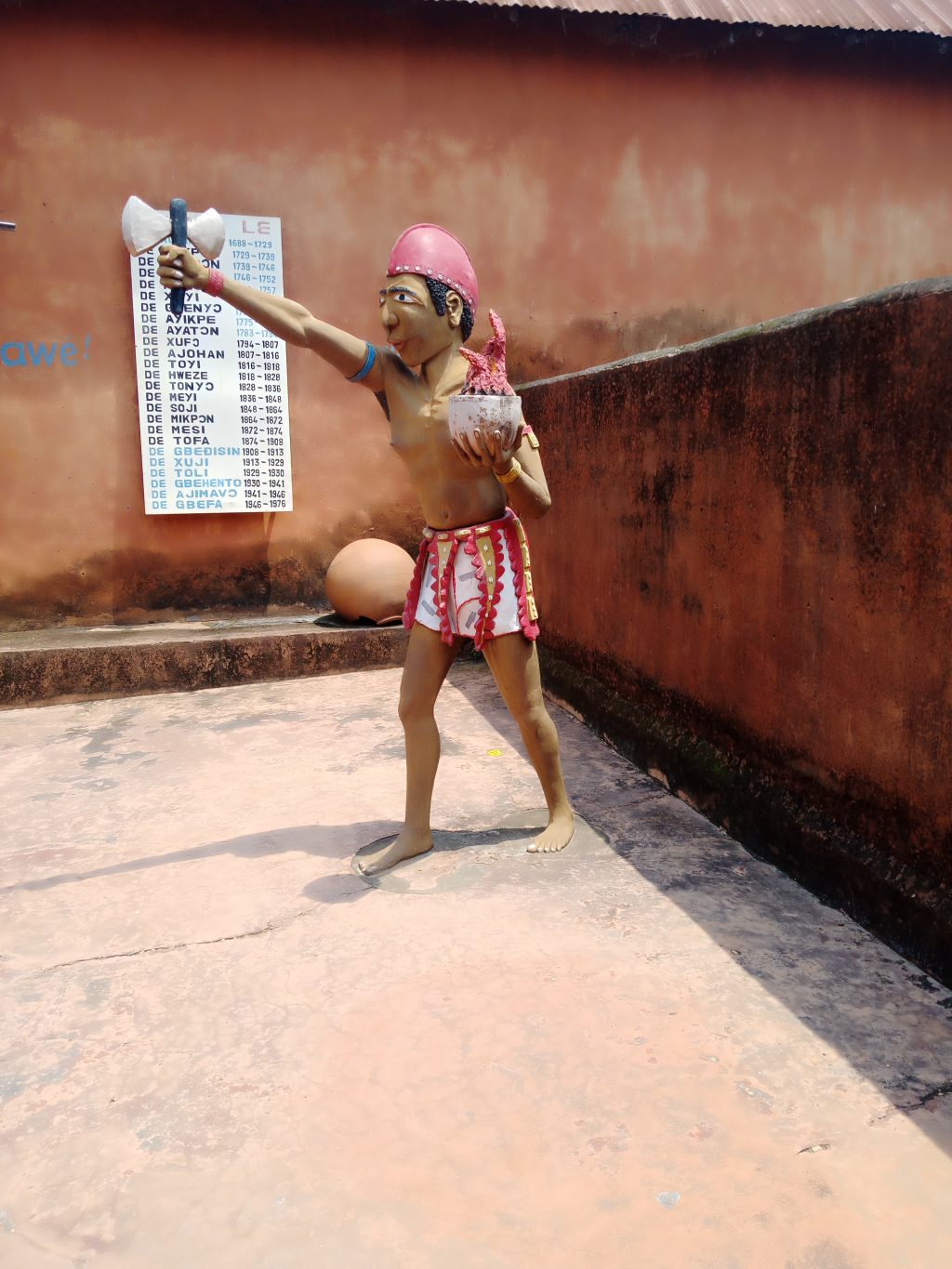 Everything You Need To Know About MUSEE HONME PALAIS ROYAL( Historical Story of The Royal Palace in Porto Novo).

Finally we got to our Destination; MUSEE HONME PALAIS ROYAL.

When we arrived at Homme Museum, we saw the tour guide whose name was Mr Vincent. Mr Vincent was the tour guide of this great museum but not really good at speaking good English. In fact you have to break your english down to earth before he can understand you and I have to place my ear down before I understand him. We negotiated how much he will collect from us to explore the museum and also be our tour guide around the beautiful city of Porto Novo. We finally come to conclusions. The Royal Palace Musée Honmé, also known as King Toffa’s Palace and more recently Musée Honmé, is a former royal residence and today museum in Porto-Novo, Benin. Porto Novo was colonized by the Portuguese and the capital city of Benin republic. The museum was a palace before and was constructed by the Portuguese during the era of slavering before it turned into a museum for sightseeing. 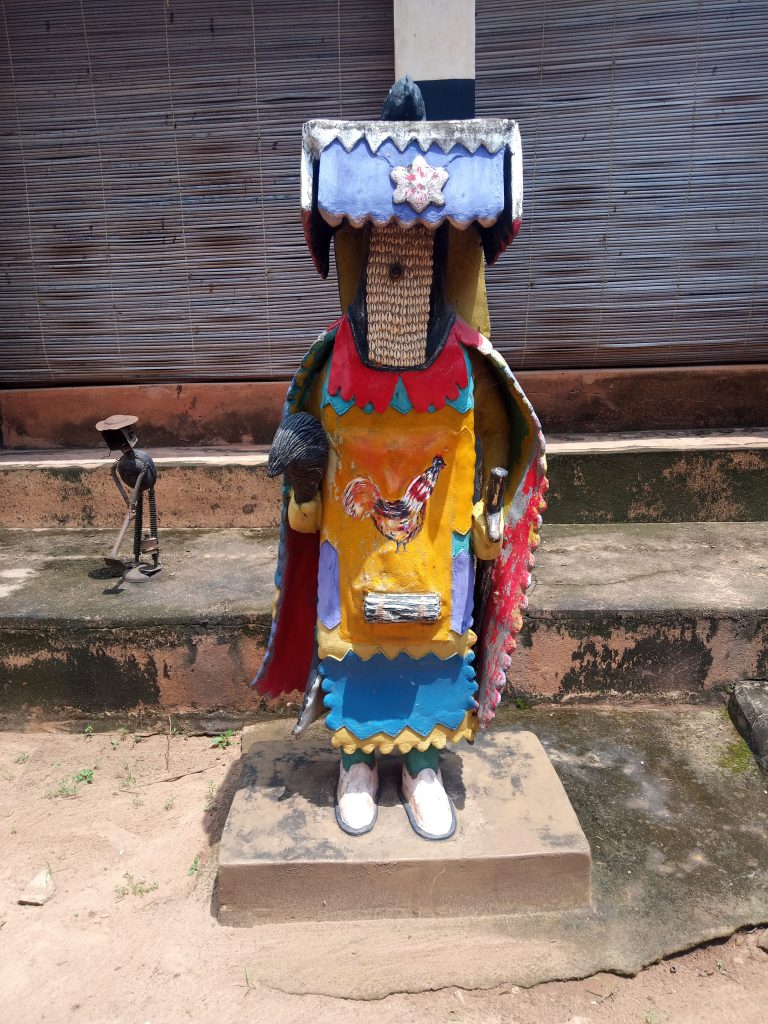 THE REVIEW OF THE ROYAL PALACE

The structures of the palace were built using mud. From the entrance of the main palace, we have two doors, the first door is where only the king passes while the second door is where his subjects like the chiefs, wives and children pass before entering the main palace. From that same door, they have an idol where you can come and pray for blessings. Inside the palace has a room where the Queen takes her bath. This room was constructed with a mini swimming pool and also the roof was open for rain to fall inside the pool. Same with the king’s bathroom too but the only difference is that you can see the king taking his bath because he’s not just respected or seen like a king but also like a god. Even when eating nobody can see the king when eating except for his Queen who serves him dinner. 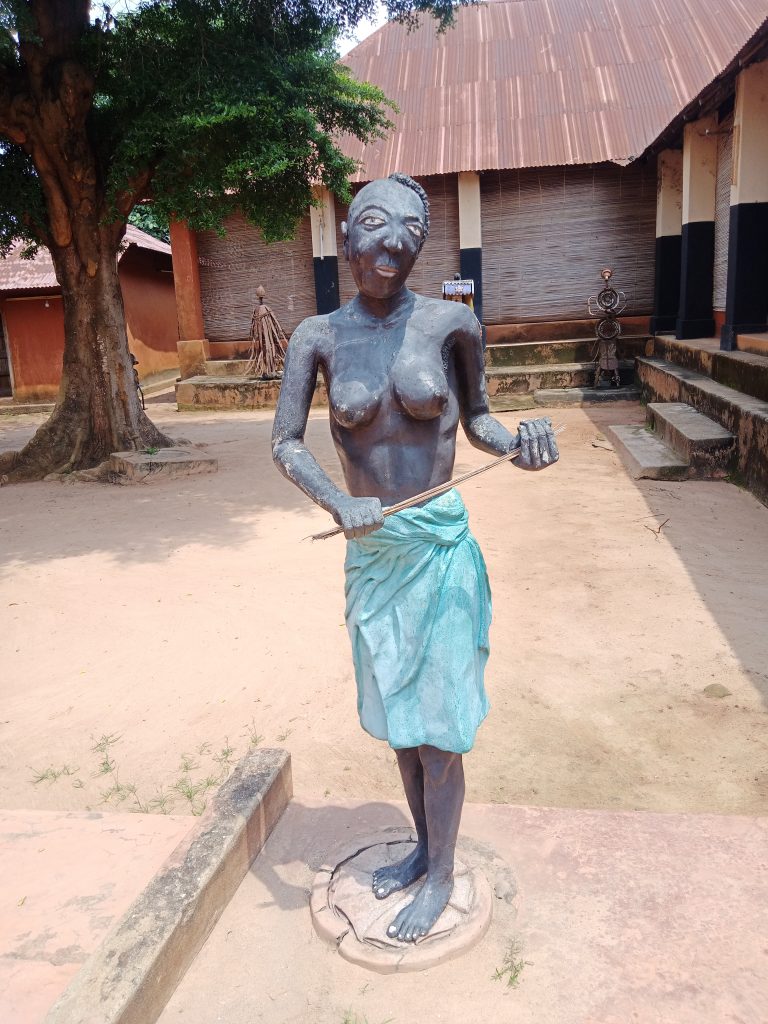 There is this room they called the waiting room but today we called it the reception where people do come and wait for the king before you are summon to come see the king but before you are called to come see the king, their is this idol called voodoo that over see your heart if maybe you have bad intention or good intention or maybe planning to do something bad to the king, it will alert the king and your visit will be terminated. In the palace, it has this small hut where an idol is called Xwedo. This idol where the king goes every Wednesday goes for prayers especially for protection. We were made to understand that every household in Porto Novo have Xwedo. 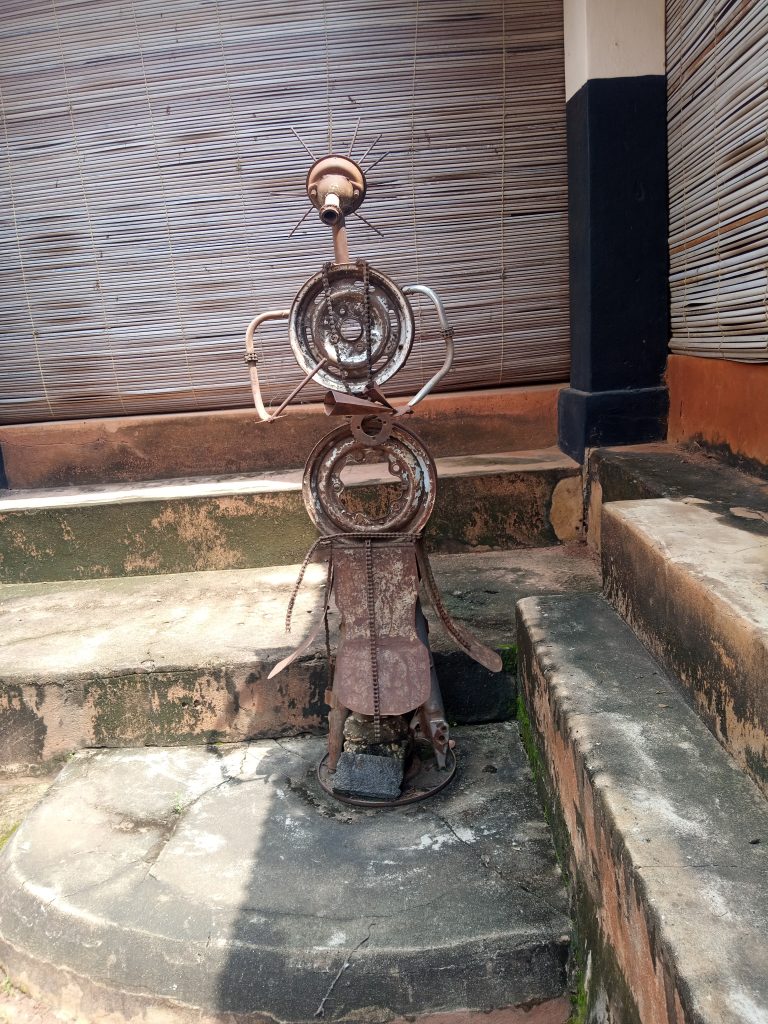 A graveyard where the second to the last king whose name is king De Toli from 9/7/1929 – 1930 was buried and I heard before now, if any king’s die, he will be buried with 3 maiden’s who automatically become Queen. In Fact the kings don’t die rather they travel. They travel with the 3 Queens that were buried with him. Those 3 Queens will serve him on his way to the journey in great beyond. “I said to myself if only they know they just wasted and killed innocent people all in the name of tradition” 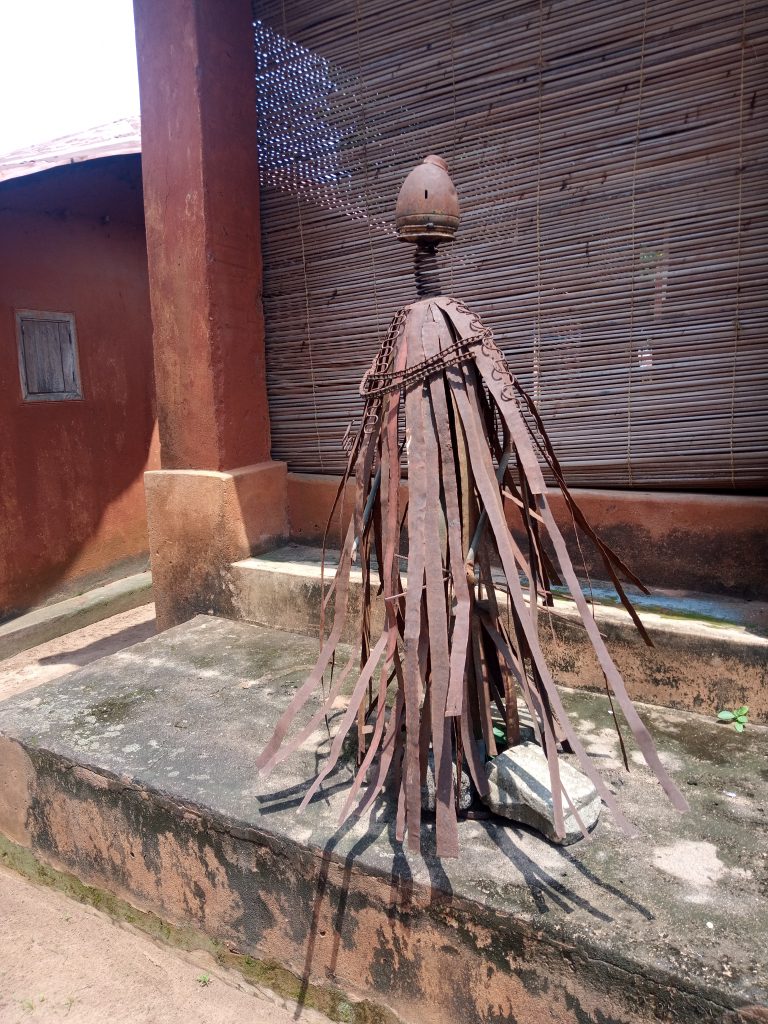 The wooden sofa that I saw was a gift that was given to the last king; king De Toffa, from his French friend Charles Perron in 1899, 100 years ago. Inside the king’s bedroom you will find a bronze Sculpture of king De Toffa. It has the same replica of the king with the picture I saw hanging on the wall. 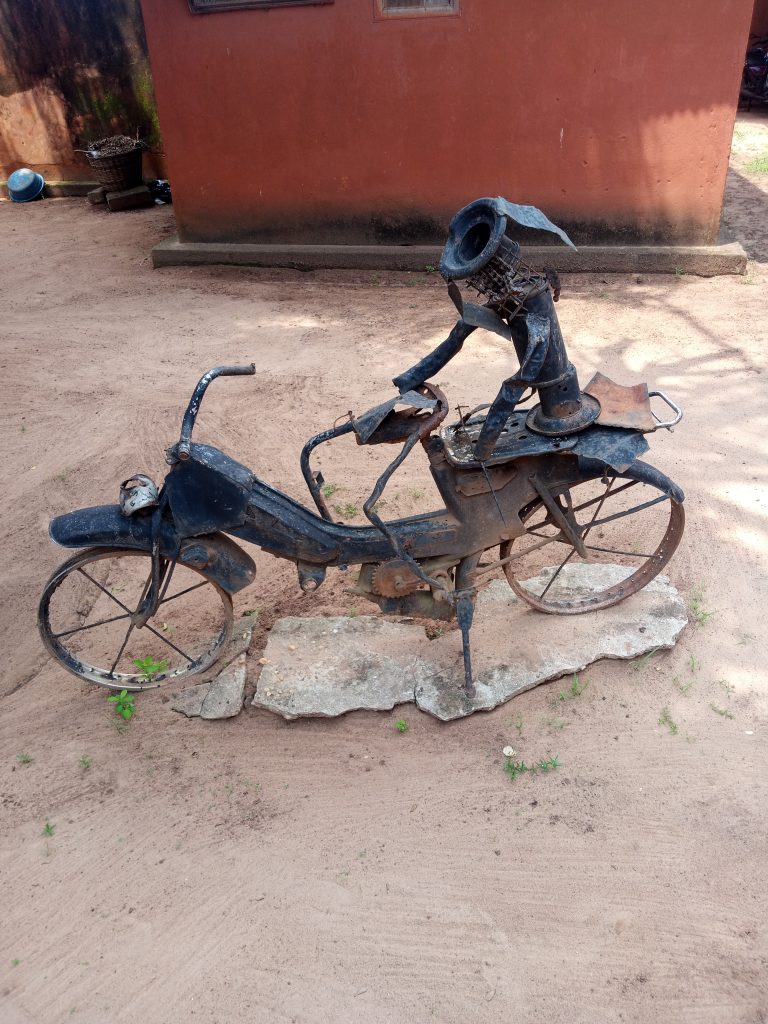 ‘Salle Des Repas’ means the room of meals. This is where the dinner room is. Only the king and Queens are meant to stay there to eat. 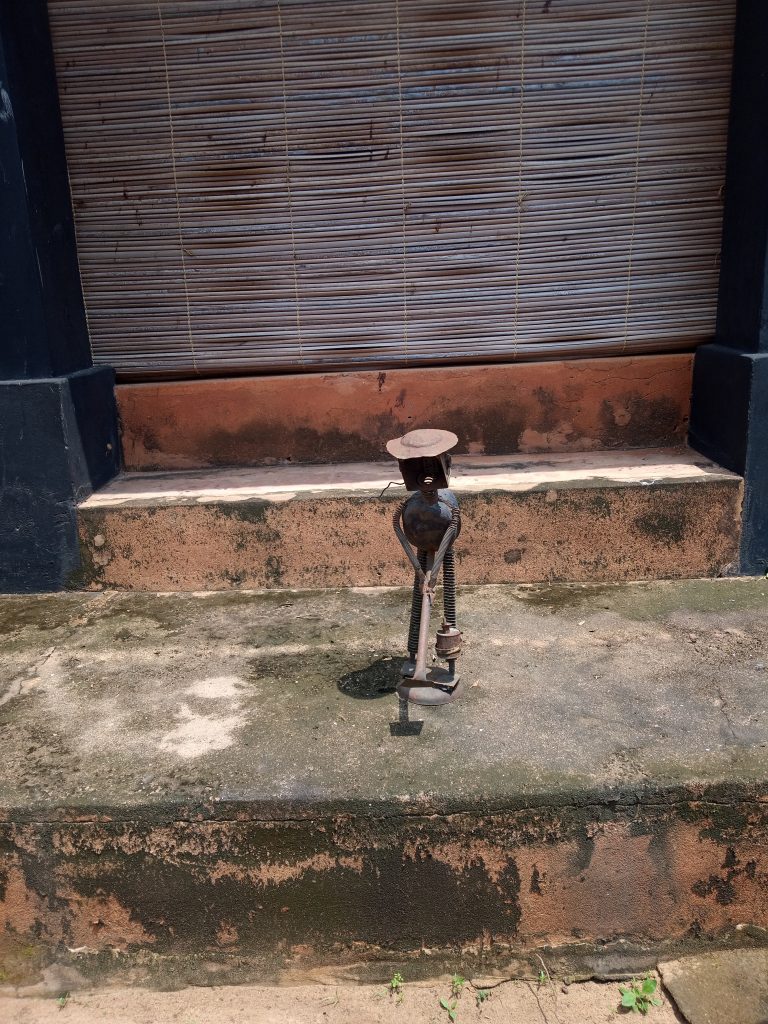 This palace is so big that inside the palace has recreational center where different activities of entertainment is being participated by the villager’s. I thought slavery was only for Nigerians not until I saw canon gun that was exchange by 21 male slaves or 15 female slaves. I was also shown some olden days cooking utensils and some old items during those days like the lamp and many more. “Placard Des Gris- Gris” meaning the power house. This is where the king comes to collect power if hears the drum of war and there is a staff in that shrine called the staff of invitation. Without you holding that staff you are not allowed to enter the power house. You can also find a room that looks like a cemetery where 3 to 4 kings were buried. Even king De Toffa’s father’s grave is still there till today. His name is De Sodji who ruled from 1848 to 1864.

The interesting part is the ‘Gozin’, meaning “JUG”. In that palace, there is one particular room that has 10 jug’s. Every 10 years, 10 virgin’s will be selected to pick up the jug and get fresh water from a stream and the water will be used for purification of the land and to appease the ancestors.. During this period of old before you become the king of this kingdom. You pass through some initiation for 27 days before you can emerge as the king. ‘Chambre Noire’ is also known as the dark room. This room is found in that graveyard. Nobody is allow to enter the room accept for the king who want to commit suicide. If a king loses a battle, out of shame he goes and locks himself after the 3 days of entering the room and he does not come out, he will be declared de*ad.

Court of the people is used for different ceremonies where the new king has been elected. They also have the court of justice and the tree of Justice. The tree of Justice is 200 years old and still in existence till today. Their prison is found behind the court.

They still have what they called the sato drum. They only beat the drum when an old person dies. Outside the palace, you will see some statues that represent different voodoo and what they represent. I saw their god of fire and thunder statue and many others. 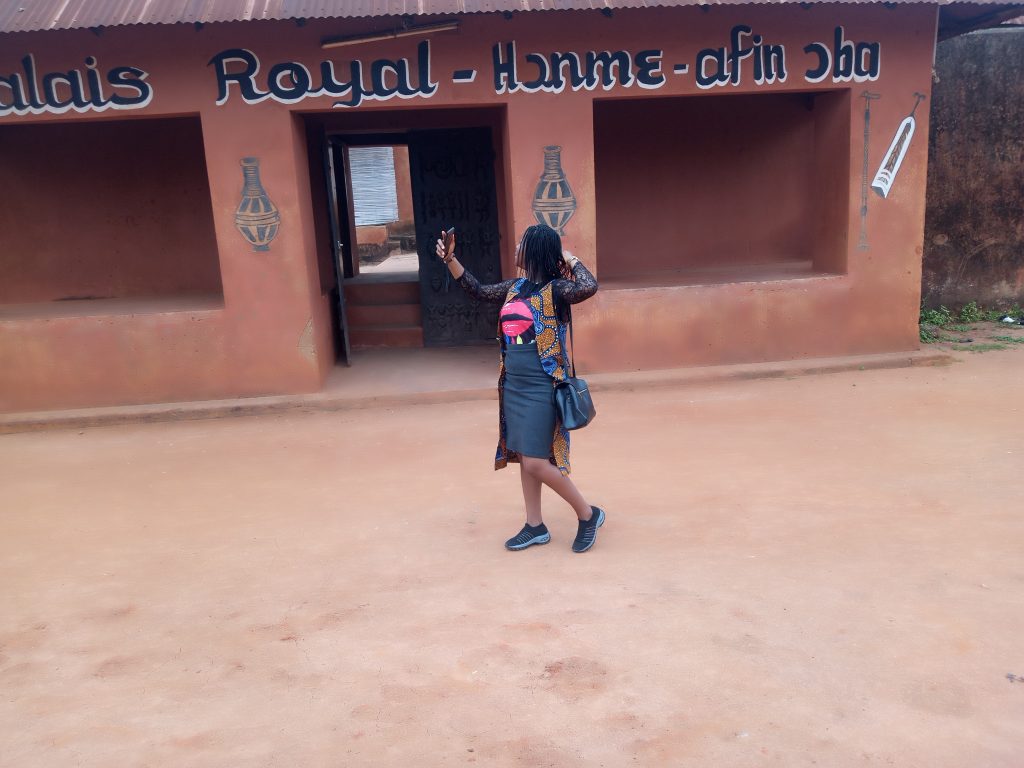 During those days if they want to mark calendar of the half moon or Full Moon they barb the half hair of a slave and the leave the other part. Once the part that was barbed is covered, there is a full moon but once the hair is half, it’s become half moon.

What you need to know!!! They don’t allow camera’s or should I say they won’t allow you to take pictures inside the palace.

You must be patient and listen to them down to earth to understand their bent English.

I’m Dennis Chukwuebuka Okeke AKA Onye-njem one of AFRICA your number one celebrity Tourist in Africa.